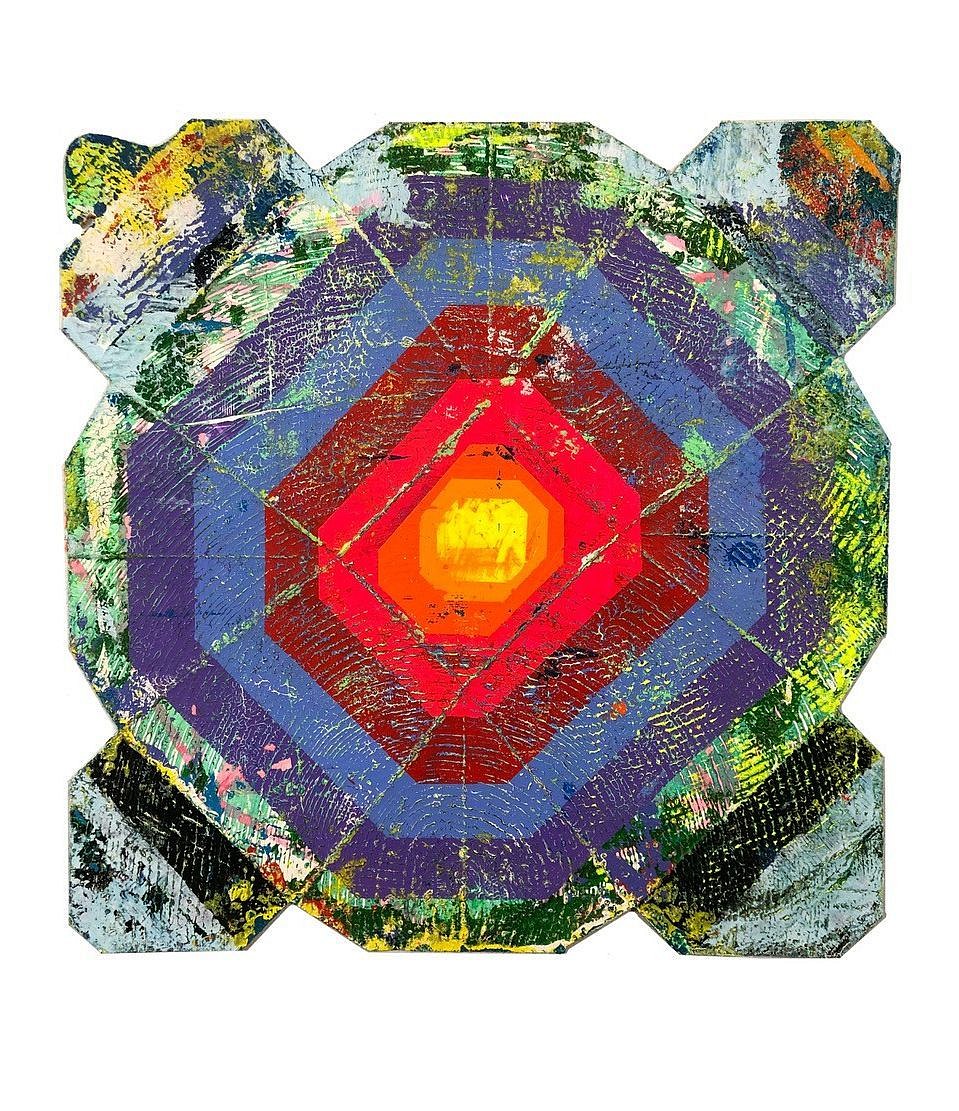 Please click here to view the exhibition on Artsy.

When we first discussed the exhibition with Jason Rohlf, he said he wanted to name the show “Spooky Action”, referring to quantum particles that prove parallel universes are possible. Because it feels like we are in one at this moment. Who are we to argue with that?

In addition to available works in the gallery inventory, this exhibition includes new works on paper, Shop Rag paintings, and a new body of works, the Thai Carton series.

Over the last 10 years, Shop Rag paintings have become an integral part of Rohlf's daily studio work. They begin as loosely woven muslin towels, used to gather shapes and patterns alongside larger canvases. They wipe brushes and palette knives, collecting all of their amazing colors and textures. As the paint covers the “rag”, its gift as a tool transforms the piece into a painting.

Of the Thai Carton series, Rohlf says his teenage daughter showed him how to turn the cartons into DIY plates. He loved the geometric form so much that he saved the cartons, unfold them, sanded and primed them, and then made patterned pieces on them. The themes of these works bring to mind energy fields and sound waves. Some have metal leaf layered in them, giving an elevated status to an otherwise ordinary, disposable item.

The titles of the paintings in this exhibition are derived from various mythical characters referring to rivers, space, sleep, and planets - a reminder of our place in the universe.

Jason Rohlf has provided an insightful statement on the works in this exhibition, his thoughts on abstract art and his mindset during his creative process:

The show's title, Spooky Action, speaks to the idea of how artists strive to keep their studio process open and ambiguous, allowing for every mark to have the potential to take you down another rabbit hole of inquiry. Some of the paths become recognizable “styles” and are easily attributable to a specific artist. Others are luxurious pools of ambiguity where anything can happen. I like to hop between them both.

“Abstract art is only important if it is the endless rhythm where the very ancient and the distant future meet.” Sonia Delaunay

I wanted the show to have the feel of an abstract remote field station, with depictions of phenomena being examined. Think cargo cult (carryout cartons being elevated into art) meets Castaway (not wasting a scrap of material)

Ancient Astronauts and the supernatural were a big deal during my ‘70s childhood. Navigating through my inspiration is like being in an occult thrift shop filled with textiles and ceramic objects. I find that things taken out of context are super interesting - like a recently spotted image of a turbofan from the engine of a supersonic jet presented as sculpture. Mosque mosaics, depictions of celestial bodies, and NASA and the International Space Station’s IG have all been magnetic elements adhering themselves to my work.

Moving through it all intuitively and looking for patterns on reflection reminds me of another amazing quote:

“I am convinced that the memory of the painter

exists first of all on the fingertips. Therefore

painting cannot be just the result of intellectual

speculation. Most of the reasoning comes afterward,

to understand what one is doing, rather than beforehand,

to decide what to do.

A postscript instead of a preface.

I gather elements of explanation and confirmation,

but I let the painting do the talking.

And if there is something contradictory in that speech,

it is because the doing, i.e. the painting wants to

be alive. Life is contradictory. In quantum mechanics

a single phenomenon can have different, simultaneous

Brooklyn-based painter Jason Rohlf translates his experience of urban and digital worlds into layered, organic abstractions that bristle with color and energy. Each canvas is built up like a collage, with textured overlays and excavated sub-layers evoking his environment, from the city’s quilt of brick, metal, paint, wood, glass, and concrete to eroded graffiti and advertisements; from construction sites to invisible strata of digital information and social media. The geometric designs suffusing his paintings recall the maps, blueprints, and network diagrams that frequently inspire him: visual representations of branching city streets and Internet pathways, the multitude of crossroads, physical and virtual, that we encounter daily.

“I think in the Information Age, I want people to see real things, things that people make with their hands,” he has said. “It’s so easy to say you’ve seen something, like on YouTube or Tumblr. I just want to create something real in the world.”

Originally from Milwaukee, Rohlf studied at the University of Wisconsin, Milwaukee, and moved to New York in 1999. He has exhibited his work across the country, created a public installation for the MTA in New York City, and lectured at the Pratt Institute, Bowling Green University, and Lawrence University, among others.