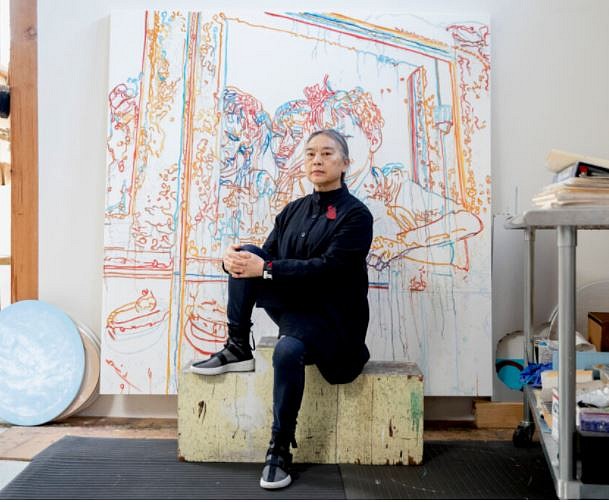 Chinese-born American artist Hung Liu, an Oakland-based painter internationally recognized for her work exploring notions of identity, immigration and the Maoist culture she grew up in, has died just as her latest exhibit went on display at San Francisco’s de Young Museum.

The Fine Arts Museums of San Francisco confirmed the news on Saturday, Aug. 7. The cause of death was pancreatic cancer, Liu was 73.

“We are deeply saddened by the news of artist Hung Liu’s sudden, premature passing and our thoughts go out to her family at this difficult time,” officials at FAMSF, which includes the Legion of Honor and de Young Museums, said in a statement. “A vibrant and vital part of the artist community in the Bay Area and beyond, Liu’s impact as an artist and as a teacher are profound. A trailblazer among Asian American artists, the legacy and extensive oeuvre she leaves behind will continue to advocate on behalf of the people who have come to our country and helped build our nation.”

Liu was also weeks away from the opening of a major exhibition at the National Portrait Gallery in Washington, D.C. “Hung Liu: Portraits of Promised Lands” will be the first solo show by an Asian American woman at the museum. It opens on Aug. 27.

“The National Portrait Gallery mourns the loss of Hung Liu, whose extraordinary vision reminds us that even in the midst of despair, and when people help each other, there is joy,” said Kim Sajet, the institution’s director, in a statement. “She believed in the power of art and portraiture to change the world.”

In a statement on Instagram, Fine Arts Museums Director Thomas Campbell wrote: “Hung grew up in Maoist China, personally experiencing the hardships of the time, the attacks on the intelligentsia and the ideological indoctrination. She migrated to California in 1984 and much of her subsequent work has focused on challenging official narratives, both Chinese and American. Many of her paintings are inspired by historical photographs, enlarged to a massive scale, and they consistently celebrate the identity and humanity of the victims of poverty, harsh immigration policies, and social stereotyping.”

On July 14, “Hung Liu: Golden Gate,” an exhibition featuring eight new and existing works by the artist, opened at the de Young. At the opening, Liu spoke about her work “Resident Alien,” a 1988 painting featuring a version of Liu’s immigration green card painted in the social realist style promoted by China. Under the place for her name are the words “Fortune Cookie.” An enlarged version of the work is now the centerpiece of the exhibition in the museum’s Wilsey Court, where it is scheduled to be on display through March. Campbell called the work “a poignant temporary memorial to her passing.”

Liu said that in 1988, the word “alien” felt like an extremely loaded term in American culture, especially in light of the popular “Alien” science fiction film franchise.

“These are IDs we show everywhere,” Liu said. “Airplanes, at the hospital — can I see your photo ID? It’s supposed to be in your wallet. I felt like wow, ‘alien’ is a really interesting term for legal residents here.”

In its statement, FAMSF called Liu “incredibly generous,” and said, “In this tragic moment, we are honored to share Liu’s indelible vision with the Bay Area community that she cared for so deeply.”

Liu’s decades-long relationship with the museum includes the commissioning of one of her most famous works, “Jiu Jin Shan (Old Gold Mountain)” in 1994. The installation consists of a “gold mountain” made of 200,000 fortune cookies, which engulf a crossroads of railroad tracks, meant to represent the junctions of East and West as well as the Chinese immigrants who died while building the transcontinental railroad.

The work was also installed at the Mills College Art Museum in 2013 as part of the exhibition “Hung Liu: Offerings.” Liu was a professor emeritus at Mills at the time of her death. Her 2006 installation “Going Away, Coming Home” at Terminal 2 of the Oakland International Airport is also among her better known works due to its high visibility to travelers.

The Rena Bransten Gallery, which has represented Liu in San Francisco since 1990, said in a statement: “Personally, Hung radiated light, energy, joy and generosity. Professionally, Hung was fearless both in China and in America as she embodied and told the vast stories of humanity: freedom, migration, struggle and love.”

Liu’s work is held in permanent collections of the Asian Art Museum, San Francisco Museum of Modern Art and San Jose Museum of Art, as well as the Whitney Museum of American Art and Metropolitan Museum in New York City, the National Gallery of Art in Washington, D.C., and Los Angeles County Museum of Art.

But in spite of her renown in the West, a museum show in her native China eluded her. In 2019, a planned exhibition at the Ullens Center for Contemporary Art to be titled  “Hung Liu: Passers-by,” was canceled by the Beijing Municipal Bureau of Culture over objections to certain paintings. One of the paintings in question, “Modern Time,” juxtaposed Karl Marx, Vladimir Lenin and Josef Stalin with “revolutionary” clocks bearing the face of Chairman Mao Zedong.

“My work is not really edgy or overly political. It just bears witness to history and humanity,” Liu said at the time. “I have no idea why the show was canceled but maybe China is not quite ready for my work.”

She added: “I never imagined that my work could be so powerful and threatening to one of the biggest nations in the world. The only response to this is to go back to my studio and keep doing my work, even better.”

A longtime Oakland resident, Liu lived with her husband, art critic and curator Jeff Kelley. The couple have a son Ling Chen Kelley.