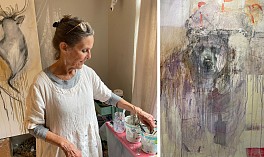 Helen Durant has been experimenting with paint, torn paper, graphite, and found objects for most of her life. From a formal painting class at the old Atlanta School of Art to her current studio at Goat Farm, Durant has invented her own ways of translating the world around her.

An art teacher at boarding school encouraged Durant’s passion for art, telling her to follow her heart. A trip to Europe exposed her to the works of the great masters. She stayed with her cousin in Cezanne's chateau noir, in Aix-en-Provence. Later, at the museum school in Boston, she received more traditional training. Two summers in Provincetown, Massachusetts, with Henry Hensche broadened her world of color.

Durant married, and her growing family became the subject of many drawings and paintings. As her children grew up and her time became more her own, Durant spent more time in her studio at the old Murray Mill, now called the Goat Farm, observing the goats outside her window. The goats inspired an extended series of works, which continue to this day. A trip to New Mexico in 2003 and a safari to Kenya in 2008 stirred her spirit and added much new material from which to draw.

Durant's love of animals has been evident throughout her career. Her concern for the environment and its wildlife has deepened into a passion for conservation. Her love of wolves and concern for the struggles they now face as result of misconceptions and myth has moved her to produce an entire body of work on the subject in the last several years.

Helen Durant has exhibited widely in the United States. In Atlanta she has shown her work for many years in some of the best venues in the city. Her work can be seen in many public, corporate, and private collections throughout the United States and abroad.

“Durant works in mixed media, primarily charcoal and acrylics, sometimes adding collage elements, such as newspaper. Her subjects are most often figures or animals. Durant is interested in the role played by the unconscious in her work, and she strives to not force the content, but rather to let it emerge out of the process of painting itself. And Durant's creative process always begins with drawing, which she calls her "first love.”