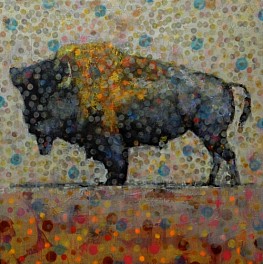 Les Thomas, who was born in British Columbia in 1962, has long recognized painting as a language in its own right, and its diversity, in terms of poetic and conceptual messages, exhibited by each individual picture. Les' education is indicative of his dedication to his chosen profession as an artist. He earned his Bachelor of Fine Arts at the University College in London, England. After returning to Canada he attended the University of Calgary, gaining his Master of Fine Arts.

Thomas sifts through a wide variety of visual sources for the imagery in his work. The influence of his view of painting as a very noble activity is combined with his acknowledgement that it can be inventive and enjoyable (for both the artist and the viewer). The other major influence is culture, in its broadest terms, including all aspects of our everyday life.

Les Thomas' dynamic wax & oil animal paintings allow him to play with the relationship between culture and nature. The special encaustic wax finish that he applies, Les explains, "may very well pertain to memory, and the manner in which we hold visual experiences within the capacities for recollection. Think of the last time you encountered a bear on the roadside, or craned your neck to watch a mountain goat or sheep on a steep and rocky slope."

"My intention with each of my animal paintings is to forge some kind of amicable relationship between the patterns and abstract paint application, and a particular animal image. In this sense, the image is not merely a pretext for a painting. It actually provides the impetus for how the entire surface is to be treated."

Les Thomas has received many awards for his work, been featured in several publications, and has his paintings in public and private collections in Canada, the U.S., the U.K. and Germany.