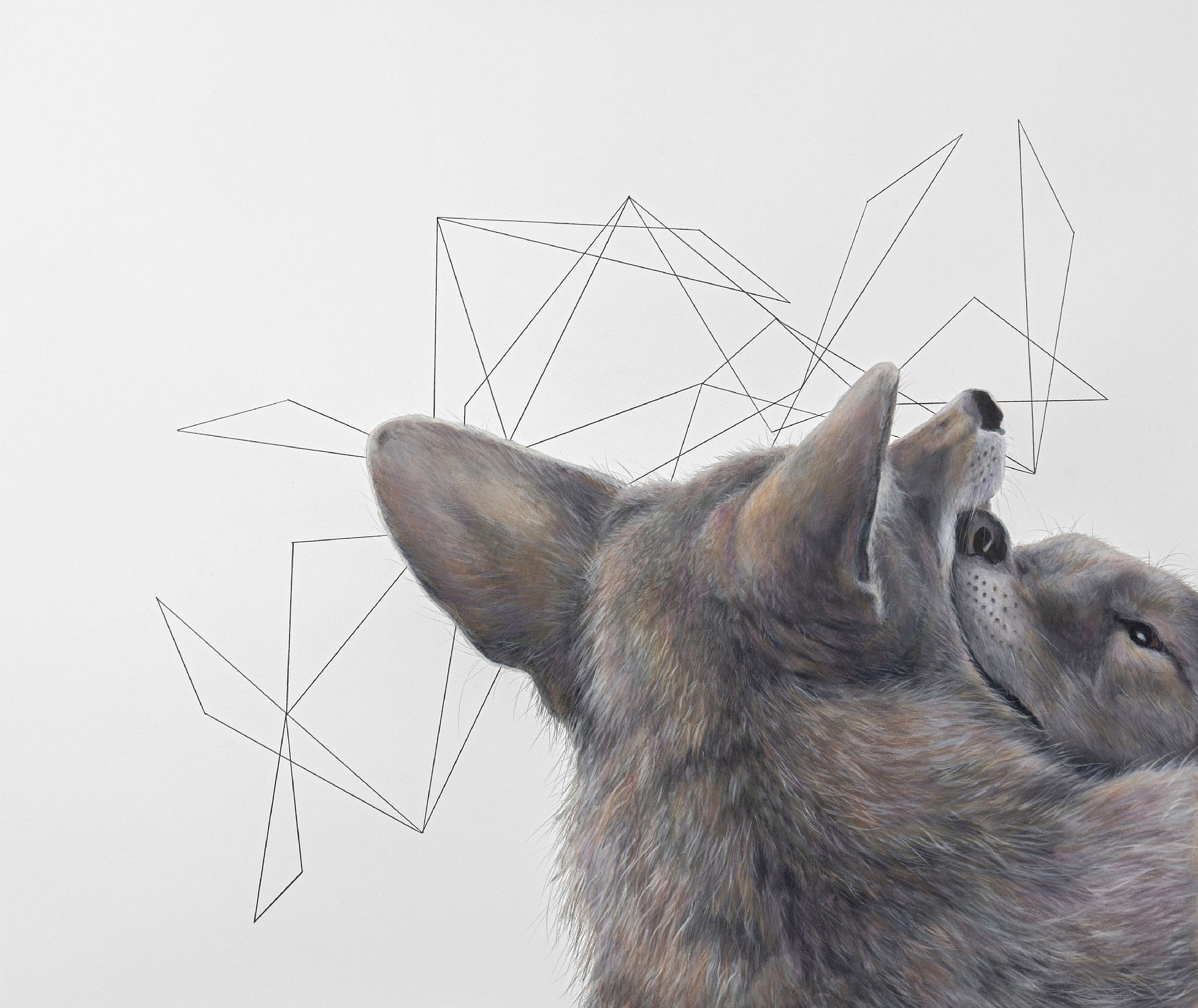 Pending any changes to current safety guidelines.
Please check this page for the latest updates.

JenMarie Zeleznak is known for her ethereal works in watercolor pencil and graphite pencil that explore emotion and interpersonal connection. She uses wild creatures to translate the human experience and to visually express the energy that she believes links all things in the cosmos. These pieces tell a universal story, one that intertwines us all as individual but connected beings.

Zeleznak’s subjects are often presented in pairs with two animals interacting as if engaging in a physically emotional conversation. Their body language suggests an intimate relationship almost if caught in a private moment or in the case of the singular creatures, a reverie.

The background of each piece features what Zeleznak calls, “star maps”. These maps are derived from Nasa images of the constellations but are connected by lines that she draws intuitively, which form tessellations that often match the moods or positions of her subjects. The predominantly white backdrop and the lack of physical environment creates a meditative atmosphere, one that allows for contemplation and for the viewer to empathize and perhaps even see themselves in the subjects.

In her most recent body of work, many of the subjects appear to be floating, in a state of gentle repose. Zeleznak writes,

“I often work from images of dead animals (not always, but often). I seek to have them in an in between space of thinking and just being, so - alive, but contemplative or surrendering to external forces.”

The titles of these pieces reflect the intimacy with which Zeleznak views and engages with her subjects and highlights the similarities that connect the animal and human realms. There is often a sense of longing, even in the verbiage, as in the piece, I Fade From Myself And Miss You Again (And Again), which features a fox who appears to be levitating, almost as if lost in thoughts of a beloved one.  Inspired by Charles Darwin’s evolutionary theory in The Expression of the Emotions in Man and Animals, Zeleznak draws from his concept that there is a set of cross-species and cross-cultural emotional expressions that can be clearly identified and that overlap. These commonalities link us all in our ability to empathize, connect and bond with one another. The sentience of non-human beings binds us closely to them as we are creatures that can feel and that can connect deeply with one another visually and emotionally.

“My work is introspective, concerned with emotional and spiritual experience. The animals I depict are a medium for the expression of the self, yet they retain their own autonomy, embodying gestures that convey the emotional form and are signposts of a kind, indicating shared aspects of being. The pictorial space here isn’t the natural world, but an in-between place—the innermost space between thinking and being. There is serenity in surrendering to an external force, suspended somewhere between despair and reconciliation.”