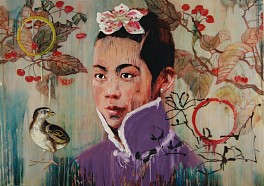 Known for paintings drawn from Chinese historical photography, Hung Liu’s works focus on what she calls the “mythic poses” that underlay the photographic surfaces of history. Representing such elemental human activities as laboring, eating, journeying, leaping, fighting, dreaming, and carrying one’s burden, these “mythic poses” come from particular historical circumstances, but seem epic, trans-historical, and allegorical in the her paintings. With an overlay of traditional Chinese birds, flowers, insects, dragons, and – most recently – stylized human figures, Liu offers her subjects artistic evidence of their own rich heritage – as if to remind or comfort them.

As a painter, Liu subjects the documentary authority of historical photographs to the more reflective process of painting; she has written: “I want to both preserve and destroy the image.” Much of the meaning of Liu’s painting comes from the way the washes and drips dissolve the photo-based images, suggesting the passage of memory into history, while working to uncover the cultural and personal narratives fixed – but often concealed – in the photographic instant.

In effect, Liu turns old photographs into new paintings, liberating the rigid methodology of socialist realism – the style in which she was trained – as an improvisational painting style that dissolves the photo-realism of propaganda art into a fresh kind of history painting. She converts socialist realism into social realism.

Liu was born in Changchun, China in 1948, growing up under the Maoist regime. She immigrated to the US in 1984 to attend the University of California, San Diego, where she received her MFA.  She currently lives in Oakland and is a tenured professor in the art department at Mills College.